Meredith has had one of her first big trials, experiencing a lot of pain and adjusting to life with a cast. Exactly one week ago today, she fell from the top of some stairs (kids were goofing around) while we were at a friends’ house and broke both bones in her forearm. When I came to the scene the bones were poking weird directions out of her arm (imagine a “w” shape from her wrist to her elbow), although they hadn’t broken through skin thankfully. Believe it or not, it was my first trip to the ER with a child.

We are thankful that she will be okay and the break does not require surgery. She was very brave throughout everything. I was also grateful that our friend could drive us to the hospital and watch Clara while we were in the ER.

While we sat together on the hospital bed, she in my arms, I had a flashback to the last time I held Meredith in a hospital bed. It was a little more than four years ago when she was born. Time sure flies! The one funny thing—when she was under conscious sedation, shortly after her arm was set, she looked at Kevin and said, “Daddy why do you have three eyes?” She was pretty dizzy, I guess.

We still don’t know how long she’ll have the cast on, but likely through the end of July. On doctor’s orders, she can’t take a bath, swim, go to the sprinkle park, go to ballet, climb on play equipment, go down a slide, ride a bike, roller skate, etc. The nurse said: “Lots of books, videos, and computer games!” So, if you think of it, say a prayer for lots of grace for Meredith this summer! Oh, and her mom too!

Meredith picked a purple cast with teddy bears ... We are overwhelmed at all the gifts and cards she has received in the mail. Even her 94 year old Great Great Aunt sent a book in the mail! She's gotten balloons, bears, flowers, some toys, candy, an ice cream gift card, etc. All the things that a nearly-four-year-old would love. 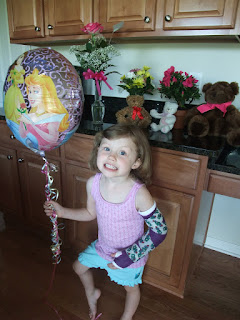 Clara has benefited from Meredith's ordeal, for sure ... 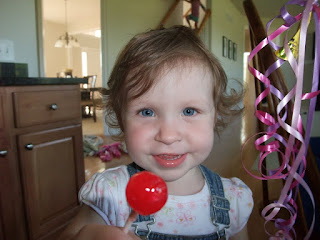 After I took the picture above, she got these balloons and some candy in the mail from her Aunt Megan. 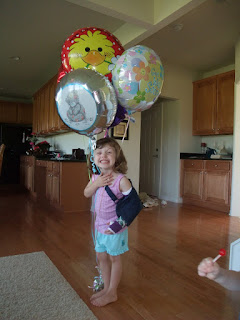 Kevin got the girls dressed on Sunday and even took time to take pictures before church. 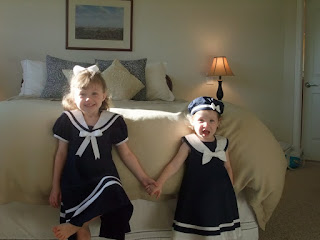 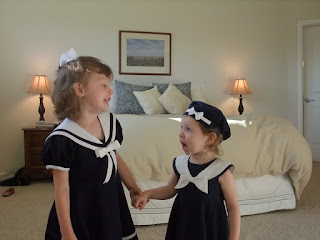 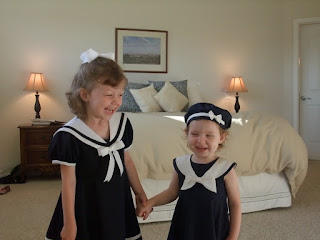 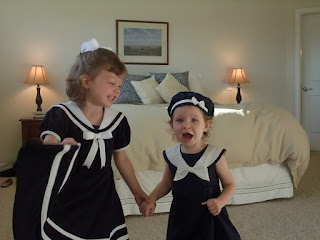 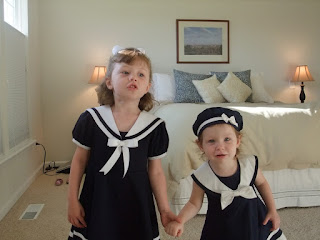 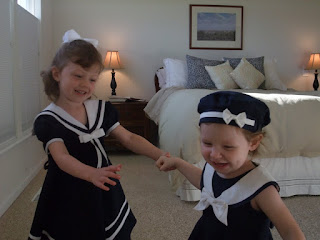 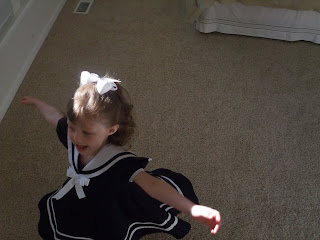 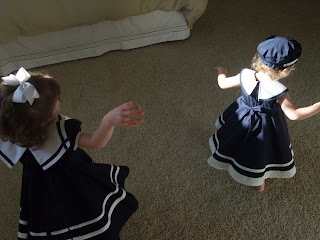 M: I need to watch that Yankee Doodle video again because I learn about America.
A: What do you learn?
M: I learned about George Washington.
A: Who is George Washington?
M (exasperated): He’s our state! Remember that?
A: He was our first president. He’s an important man, isn’t he?
M: No.
A: Who’s important then?
M: Daddy is. Daddy is a very nice man.

M: I’m bored.
A: Why don’t you go clean up that mess you made?
M: Because that would make me even boreder.

When we were downtown one day, we walked by the state capitol building and I explained to Meredith how all of our state’s laws are made in that building. Then I asked, “Meredith, would you like to be a lawmaker someday?” She replied, “Maybe. But I also would like to be a person who fixes broken fountains because then I could ride in one of those boats. When you have no kids and no more full tummies [I presume she means pregnant], do you want to do that? You could do that with me. That would be so fun.”

For a girl who knows the truth about Santa and the Easter Bunny, we’ve really got Meredith duped when it comes to something we call “magic kisses.” I blame it all on Kevin. He started it. He told her that if you really love someone you can’t wipe off their kisses. Meredith is always asking, “Was that a magic kiss?” “Can you still see it on my face?” “Can you please count how many magic kisses I have now?” One day when I was done counting all of Meredith’s magic kisses, she said, “Wow. People really love me.” Another day I said, “Wait Meredith, let me look at your face. You have something on your face.” Without missing a beat she said, “Oh, it’s probably just a magic kiss.”

Yesterday, with no prompting from me, Meredith drew a map which included her house, her two grandmas’ houses, an airport with a plane sitting on the runway, and a big sky with a cloud and a rainbow. The best part was that she labeled everything as best as she could. She spelled airport: “IRPORT.” She spelled grandma’s house: “GRIMA HES.” Then she took a purple crayon and drew wispy smoke coming out of one of the chimneys and said, “Look! I’m like Harold with a purple crayon!”
Posted by Amy K at 3:11 PM No comments:
Labels: Meredith
Newer Posts Older Posts Home
Subscribe to: Posts (Atom)